skip to main | skip to sidebar

Did Robert Lichfield step down from his position as Mitt Romney's Utah finance committee co-chairman or was he asked to step down?
Posted by Isabelle Zehnder at 2:59 PM

Robert Lichfield involved in schools that are subjects of lawsuits

A Utah fund-raiser for Mitt Romney who helped the GOP presidential candidate collect $300,000 in donations at an event in St. George earlier this year is no longer part of the campaign. Robert Lichfield, who is affiliated with several schools for troubled teens that are the subjects of lawsuits alleging child abuse, left his position as a Utah finance committee co-chairman in July, a spokeswoman for the Romney campaign said Thursday.

The Web site "Radar" reported Thursday that Romney asked Lichfield to step down. But Romney spokeswoman Gail Gitcho said Lichfield "resigned on his own accord" from the campaign shortly after stories surfaced in late June about his legal problems.
Lichfield's name did not appear on a list of national finance chairmen and co-chairmen released by the campaign on July 31 that included seven Utahns. Campaign officials said then that Lichfield was no longer involved in fund raising.
The Web site report comes after two other people involved in the Romney campaign made headlines.

Sen. Larry Craig, R-Idaho, stepped down last month as Romney's Senate liaison, after the public learned of his guilty plea to a charge of disorderly conduct in an airport bathroom in connection with a sex sting.

Earlier in August, a Romney national finance co-chairman, Alan Fabian, resigned his position with the campaign after he was indicted by a federal grand jury on 23 counts of bankruptcy fraud, mail fraud, money laundering, obstruction of justice and perjury.

Romney fundraiser, Robert Lichfield, in Utah is off team

WASHINGTON - A top Utah fundraiser for Mitt Romney's presidential campaign - who has links to an organization facing a civil lawsuit alleging child abuse - is off Romney's state finance team.

Robert Lichfield left as one of Romney's campaign fundraisers in July, though there are disputing accounts whether he was pushed out or left on his own.

Lichfield, who founded the umbrella group called the Worldwide Association of Specialty Programs and Schools, brought in about $300,000 earlier this year for Romney during a single Utah event and has donated tens of thousands to the former Massachusetts governor and other Republicans in recent years.

Lichfield is named in a federal lawsuit filed in the U.S. District Court for Utah charging that students of the "behavior modification" schools with ties to WWASPS were subjected to "physical abuse, emotional abuse and sexual abuse." The suit had 140 defendants at last count.

WWASPS president Ken Kay declined to comment to The Salt Lake Tribune but told www.adaronline.com that the Romney campaign asked Lichfield to resign from the finance team. Lichfield could not be reached for comment.
"Governor Romney has asked Mr. Lichfield to step down and not be involved in any more fundraising until the lawsuit is resolved in the positive, which we are confident will happen," Kay said via e-mail to the Radar Magazine's online version.

"Mr. Lichfield was not urged by the governor, he resigned from his campaign position on his own accord," Romney spokeswoman Gail Gitcho said Thursday.

The lawsuit against Lichfield, WWASPS and others involved in the schools alleges brazen acts of child abuse, including that students of the various programs had been forced to eat their own vomit, clean toilets with a toothbrush and brush their teeth afterward, were chained or locked in dog cages, kicked, beaten, thrown and slammed to the ground and forced into sexual acts.

"We don't condone any type of child abuse and it's highly unlikely that any of the incidents ever happened," Kay said, noting that troubled teens often have a record of fabricating stories.

Lichfield and family big donors Robert Lichfield, a La Verkin entrepreneur, founded the World Wide Association of Specialty Programs and Schools. The organization has been affiliated with a number of schools for troubled youths, several of which schools have been closed amid allegations of abuse or neglect.

Lichfield and family members began donating heavily to Republican candidates and causes in 2001. In the 2002 and 2004 elections, a Salt Lake Tribune investigation found more than $1 million in contributions from family members and business associates.
Posted by Isabelle Zehnder at 2:54 PM

Big scoop coming from Radar: Mitt Romney, just days after ousting disgraced Sen. Larry Craig from his Presidential campaign, has had to fire another well-connected state campaign organizer due to tawdry dealings — this time involving abuse and fraud toward troubled teens.

“Mitt Romney has asked his Utah finance committee co-chair, Robert Lichfield, who is affiliated with a controversial network of schools for troubled teens and has been dogged by allegations of abuse and fraud, to step down,” according to Radar’s report.

Lichfield is Utah’s largest political donor, and organized a fundraiser in February in his hometown of St. George that made nearly $300,000 for the Romney campaign. Members of the Lichfield family have donated $17,000 to Romney thus far.

But besides being rich, Lichfield was also named in a June 2007 complaint filed in federal court in Utah by the families of 133 children who allege kids under his supervision ”were subjected to physical, sexual, and emotional abuse.”

Radar notes that one plaintiff, Chase Wood, “claims he was fondled, forced to eat his own vomit, and locked in a dog cage at the Cross Creek Center for Boys, a school that Lichfield founded in the late 1970s.”
Posted by Isabelle Zehnder at 12:23 AM

Mitt Romney has asked his Utah finance committee co-chair, Robert Lichfield, who is affiliated with a controversial network of schools for troubled teens and has been dogged by allegations of abuse and fraud, to step down, Radar has learned.

Ken Kay, the president of the Worldwide Association of Specialty Programs (WWASP), a nonprofit group co-founded by Lichfield that provides consulting services to schools specializing in "behavior modification" for wayward teens, said in an e-mail that Romney has asked Lichfield to stop participating in fundraising activities for the campaign.

Lichfield was named in a June 2007 complaint filed in federal court in Utah by the families of 133 children who have attended schools associated with WWASP, alleging that they were subjected to physical, sexual, and emotional abuse. One plaintiff, Chase Wood, claims he was fondled, forced to eat his own vomit, and locked in a dog cage at the Cross Creek Center for Boys, a school that Lichfield founded in the late 1970s.

"Gov. Romney has asked Mr. Lichfield to step down and not be involved in any more fundraising until the lawsuit is resolved in the positive, which we are confident will happen," Kay said.

Lichfield is Utah's largest political donor. He organized a fundraiser in February in his hometown of St. George that netted nearly $300,000 for the Romney campaign, and members of the Lichfield family have donated $17,000.

According to a class-action lawsuit filed against him in New York in 2006 for fraud, Lichfield makes $90 million a year through a complicated network of businesses based around behavior modification and has owned or operated a total of 26 schools worldwide, some of which have been closed by local authorities for mistreatment. The lawsuit claims that the Academy at Ivy Ridge, a school that sits on land owned by Lichfield and for which he has provided consulting services, admitted students for five years without any accreditation as an educational institution from the state.
Last week Randall Hinton, an educational counselor who has worked at Cross Creek and many other schools affiliated with WWASP, was convicted of third-degree assault and false imprisonment for slamming the head of a 15-year-old student at Royal Gorge Academy in Colorado into a stairwell and forcing a 17-year-old to lie flat on his stomach for so long he had to vomit. Hinton faces up to three years in prison.

Kay, a longtime associate of Lichfield's, says WWASP simply provides marketing and other business services to schools, does not deal directly with students, and is not responsible for any mistreatment.

Lichfield could not be reached for comment. A spokesman for the Romney campaign did not immediately return messages.
Posted by Isabelle Zehnder at 12:17 AM

Randall Hinton is a long-time business associate of Robert Lichfield. This is not the first time Hinton has been accused of abusing children. Parents and former victims have been alleging he abused children for years. This time he got caught, arrested, and tried by a jury of his peers. He has been convicted of his crimes and he is scheduled to be sentenced in November 2007. Click here to read more.
Posted by Isabelle Zehnder at 8:32 AM

Utahn Robert Lichfield's legal trouble surrounding his schools for troubled teens have been linked to his fund-raising for presidential candidate Mitt Romney, according to a story published today in Washington, D.C.-based newspaper The Hill.

Lichfield's, one of Utah's top political donors, is also one of six co-chairs of Romney's Utah finance team. The article says the candidate has "collected hundreds of thousands of dollars through the fund-raising efforts of a supporter targeted by several lawsuits alleging child abuse."

The story points out that 133 plaintiffs have alleged in a federal court case filed in Utah that Lichfield owned or operated schools where students where suffered "physical abuse, emotional abuse and sexual abuse" ranging from unsanitary living conditions, exposure to extreme temperatures, beatings, confinement in dog cages, or sexual fondling.

There is also a pending case in the U.S. District Court of the Northern District of New York, that alleges Lichfield and several partners defraud people by operating an unlicensed boarding school in upstate New York, according to the article.

Such claims against Lichfield are not new nor is his work raising money for Romney, as he has raised money for numerous political candidates. But the story says the "allegations could force Romney to re-examine his relationship with his Utah finance co-chairman or put pressure on him to give away the contributions Lichfield helped raise."

Romney's campaign told the Deseret Morning News that it "will continue its policy to make our fund-raising efforts as transparent as possible."

Lichfield could not be reached for comment.
Posted by Isabelle Zehnder at 4:28 PM 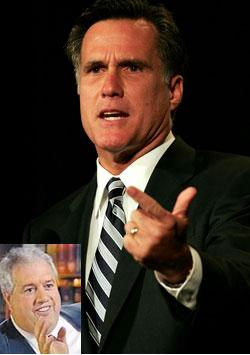 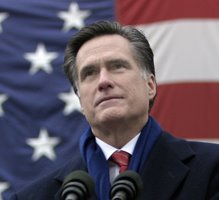 Isabelle Zehnder
is a Certified Family Coach who has over 25 years mentoring, coaching, and advocating for families.